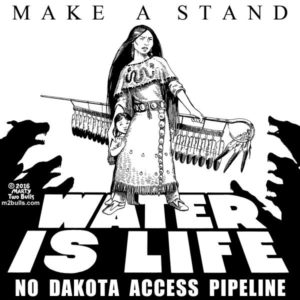 The indigenous-led San Francisco Defund DAPL Coalition needs our support in getting the San Francisco Board of Supervisors to pass a Defund DAPL ordinance.  This would prohibit cash management contracts and financial investments with the 35 banks financing the Dakota Access Pipeline.

A draft of the ordinance has been sent to the three most progressive Supervisors on the Board, but they’ve indicated that this is not a priority for them.   The ordinance does not yet have a sponsor.   The San Francisco Defund DAPL Coaltion is urgently calling for allies to show up to the next Board of Supervisors meeting on Tuesday to show public support and ask the board to work with them on this ordinance.

The Water Protectors are in their final hour as they stand off with heavily militarized law enforcement at the Oceti Sakowin and Oceti Oyate camps in Cannon Ball, ND, so support efforts cannot wait.  They could use all the prayers and solidarity they can get.   Wopila in advance and Mni Wiconi!