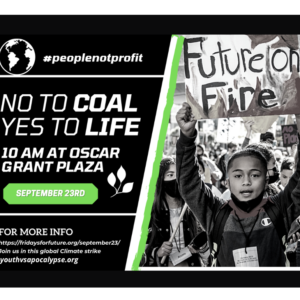 Join Youth vs Apocalypse to say: No to Coal in Oakland! and  No to all forms of violence! This is action is part of the Global Climate Strike on September 23, 2022

This global climate strike is focused specifically on economic, racial, and international justice   “To demand policymakers and world leaders to prioritize #PeopleNotProfit!  Globally, we are asking for Climate Reparations, not as charity, but as a transformative justice process in which political power will return to the people.  This should be a follow through on the demands from Indigenous, black, anti-patriarchal and diverse marginalized communities to get their lands back, giving resources to the communities most affected  by the climate crisis for adaptation, loss and damages.”

Now that Oakland is again threatened with coal shipment from the port, YVA is rallying to say no to coal in Oakland and also no to all forms of violence. Join the youth who are leading this important action “to support each other, express joy, celebrate life, fight to protect our lives and be able to live together.”

YVA says:
“Together let’s bring back the power to the people whose power has been stolen. Together, let’s build a system and home where we prioritize #PeopleNotProfit.”

Gather at Oscar Grant/Frank Ogawa Plaza (Broadway and 14th St. Oakland. then march on a 1-mile loop through downtown, past the Oakland Police Department and the Federal Building, then return to the plaza. Map here.

Background: For more information on the history of the fight against coal in Oakland, check out these google slides