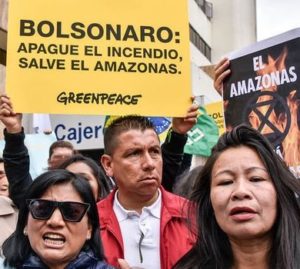 Join Amazon Watch and Extinction Rebellion to answer the call from the National Articulation of the Indigenous Peoples of Brazil (APIB) for global pressure to  force Brazil to address the urgent need to suppress the fires, protect the Amazon and respect the rights of indigenous peoples and their territory.

Unprecedented fires are ravaging the Amazon – more than 74,000 fires this year is an 84% increase over last year’s count. This is an international tragedy and a dangerous contribution to climate chaos.

This devastation is directly related to President Bolsonaro’s anti-environmental rhetoric, which erroneously frames forest protections and human rights as impediments to Brazil’s economic growth. Farmers and ranchers understand the president’s message as a license to commit arson to expand their operations into the rainforest.

Amazon destruction is not new, however. Indigenous people of the Amazon have been sounding the alarm about risks to the rainforest for years and resisting the destruction – sometimes at the cost of their own lives.

Governments and companies around the world are emboldening Bolsonaro’s toxic policies when they enter trade agreements with his government or invest in agribusiness companies operating in the Amazon.

Amazon Watch and APIB conducted an investigation this year that showed how many US and European companies – like Cargill and ADM – and financiers – like BlackRock, JP Morgan Chase and Santander – are complicit in Amazon deforestation.