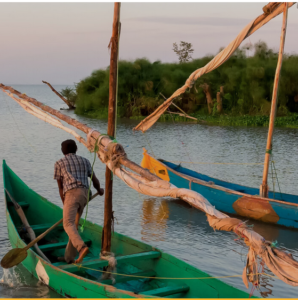 Join the growing global resistance to the East African Crude Oil Pipeline in a week of virtual actions hosted by 350.org.

From the call to action:

“This project is both a human rights violation and a carbon bomb that our climate cannot bear. Just one leak could poison the water that 40 million people depend on for food, farming, and their livelihoods.

“Communities in East Africa are taking to the streets in protest. Activists around the world are pushing banks and insurance firms to drop EACOP. The EU Parliament just called the project a violation of human rights. Momentum is building.

“But, the company behind the project – Total Energies – is getting desperate, and new backers are trying to step in to resurrect the project.”

So 350.org is asking people to sign up to take a virtual action every day from October 24 – 30 to #StopEACOP .

When you sign up, you will receive a new action to take each day starting Monday, October 24. “You’ll hear about and have the chance to join campaigns in Africa, the United States, Europe, and Asia, all working in solidarity with communities in Uganda and Tanzania to stop this project and build a world free from fossil fuels.”

You can choose which actions to do and do them at your own time.