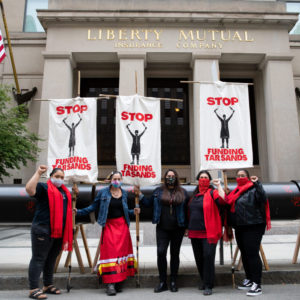 Liberty Mutual is a major enabler of climate destruction,  insuring fossil fuel projects from tar sands pipelines to Arctic oil and gas drilling. But they refuse to meet with indigenous communities impacted by these projects.

Join Stop the Money Pipeline in an action that will get their attention:  filling the calendar of Liberty Mutual’s CEO, David Long, and other executives with hundreds of invitations to remind them of the meeting requests that they are ignoring.

Stop the Money Pipeline has created step-by-step instructions for joining this action to jam the calendars of these climate criminals. You can help!

Find everything you need  here

A December 3 article in the Intercept says:

“On September 2, the Great Plains Tribal Chairmen’s Association, which represents 16 tribal nations, sent a letter to David Long, the CEO of Liberty Mutual, urging the insurance company to “immediately end its relationship” with the Keystone XL pipeline. This pipeline is expected to carry bitumen oil from Alberta’s tar sands into the United States in a proposed route that would violate Indigenous treaty rights and sacred sites. Long and Liberty Mutual did not respond to requests for comment.

Liberty Mutual is providing financial backing to the Keystone XL pipeline with a publicly filed surety bond worth $15.6 million. An additional $15.6 million bond is required after construction begins.

The company did not acknowledge the letter, so Indigenous activists delivered a petition and staged a protest on October 2 outside of Liberty Mutual headquarters in Boston, constructing a mock pipeline covered in red handprints to signify the Indigenous women who have been sexually assaulted and murdered, often in connection with fossil fuel extraction and pipeline workers moving near their homes. On October 19, over 40 Indigenous women signed another letter to global financiers backing the tar sands fossil fuel projects that will harm their communities across the United States, including by increasing the spread of Covid-19 with an influx of out-of-state workers.”