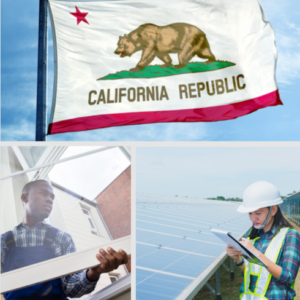 Nineteen labor organizations—including unions representing refinery workers in Northern and Southern California and the Alameda Labor Council— have endorsed a detailed plan for an equitable  transition to a clean-energy economy in California.

This major new report, A Program for Economic Recovery and Clean Energy Transition in California, details programs for meeting California’s 2030 climate goal (40 percent economy-wide reduction in greenhouse gas emissions from the state’s 1990 level) by creating roughly 418,000 jobs.  It argues that state policy should ensure that the jobs created are good-paying jobs with full labor rights and access by historically excluded people.

The same strategies, the report says, could be continued to meet California’s longer-term goal of being carbon-neutral by 2045.

The report was commissioned by the American Federation of State, County and Municipal Employees Local 3299, the California Federation of Teachers, and the United Steelworkers Local 675.  Its authors are faculty members of the University of Massachusetts at Amherst, including Robert Pollin, a leading expert on just transition.

The report provides detailed calculations for strategies outlined in an earlier report, Putting California on the High Road, from the UC Labor Center. Both reports emphasize the need for measures to protect fossil fuel industry workers including:
* Pension guarantee for all workers.
* Re-employment and income-level guarantees for all displaced workers.
* Retraining and relocation support as needed.
* “Glide-path income support” for workers 60 – 64.

The report comes as the Newsom administration is developing a report on Just Transition in California.