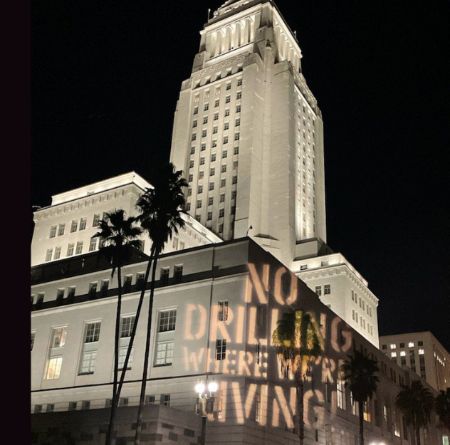 On December 1st, the Los Angeles City Council’s Energy, Climate Change and Environmental Justice Committee passed a motion calling for an ordinance to make oil and gas drilling a non-conforming use throughout the City of Los Angeles, and an amortization study to determine the timeline to phase out production to allow for a just transition of  the impacted workforce.  The motion also calls for increased health studies and air monitoring in the interim.  The motion must now be approved by a full City Council vote.  An audio recording of this historic meeting is here.

From a press release by the STAND.L.A. coalition:

The Committee acted on the conclusions of a recent City Attorney report confirming the City’s legal authority to take this action.  At a meeting of the same committee two weeks ago, the City Attorney’s office indicated their willingness to defend such an ordinance against legal challenges from the oil industry or oil companies.

The unanimous vote came after years of community organizing and advocacy from residents impacted by oil drilling and environmental justice advocates . . . urging the City to protect public health by phasing out neighborhood oil drilling.

This remarkable leap forward for the City of Angels came on the heels of a unanimous vote in October by the city council in neighboring Culver City supporting Oil Drilling Subcommittee recommendations to phase out oil drilling, properly cap and remediate drilling sites, and develop a plan to enact a just transition for workers within five years.   Watch that meeting’s live stream here.