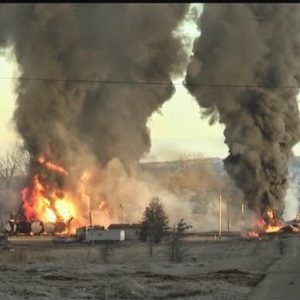 Explosion at biofuel plant in Mississippi

Communities for a Better Environment and the Center for Biological Diversity sued Contra Costa County on Tuesday over its rushed approval of two proposed biofuel refineries in the Bay Area, using incomplete and misleading environmental reviews.

The Marathon and Phillips 66 refineries have submitted proposals to convert from refining petroleum to refining “biofuels.” If these projects go forward, they would make Contra Costa the largest center of biofuel refining in the world.

Biofuels are promoted as a green alternative to petroleum on the theory that the absorption of carbon dioxide by growing plants balances the carbon dioxide released by burning the oils they produce.

The lawsuits argue that environmental reviews failed to give adequate consideration to a number of serious local and global hazards created by the refining of biofuels, including:

* Refining biofuels requires higher temperatures than refining petroleum, creating the potential for more fires, explosions, and flaring. It requires larger amounts of hydrogen, usually produced in a process that releases methane, a toxic gas that is a more powerful GHG than carbon dioxide.

* Some feedstocks, especially animal fats, create potential odor problems, and plant and animal fats have the potential to gum up refinery equipment.

* Growing enough crops for biofuels has the potential to divert agricultural land from food crops, raising global food prices. There is also a danger that demand for biofuel feedstock will lead to increased deforestation.

More details on the projects and the lawsuit here.