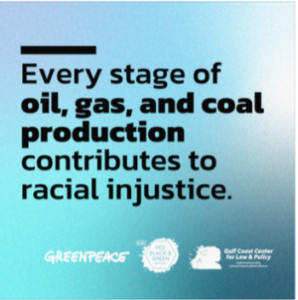 Check out this important new report, Fossil Fuel Racism: How Phasing Out Oil, Gas, and Coal Can Protect Communities. The report was issued by Greenpeace, the Movement for Black Lives, and the Gulf Coast Center for Law and Poverty and endorsed by many major environmental and social justice organizations.

According to the report’s overview, it “synthesizes existing research and provides new analysis that finds that the fossil fuel industry contributes to public health harms that kill hundreds of thousands of people in the U.S. each year and disproportionately endanger Black, Brown, Indigenous and poor communities. The report argues that President Joe Biden and the 117th Congress have a historic opportunity to improve public health, tackle the climate crisis, and confront systemic racism at the same time by phasing out fossil fuel production and use.”