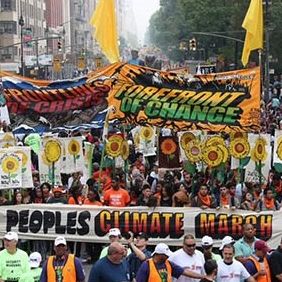 All are welcome to the December 1 meeting of  the Northern California Climate Mobilization, to participate in a discussion of  national and local plans for climate actions from now until May 1. The coalition (People’s Climate Mobilization, PCM) that organized the giant NYC climate action in 2014 is planning a series of actions between now and May Day, including another large national march, this time in Washington, DC, on April 29th.

Leading up to the national march, they are proposing a 100-Day Campaign.  On December 8 the coalition will do a “media action” in DC focused on the Transition office, daimed at whoever leads the environmental transition — with related actions around the country.  That will include or be followed by a media blitz,  “100 local stories.” Another focal point will be the first 100 hours of the new administration. The PCM is calling on local activists to organize 100 actions around the country during first five workdays of the new administration.

On May 1, the PCM will sponsor direct actions linking climate to other social-justice issues.

Everyone is welcome to attend this regular monthly meeting of the NCCM  to discuss these plans and more.