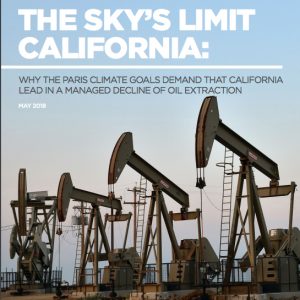 The Sky’s Limit: Why The Paris Climate Goals Demand that California Lead in a Managed Decline of Oil Extraction.: This new report by Oil Change International outlines some of the steps California needs to take to provide REAL climate leadership.

California has no plan to phase out oil and gas production despite the vocal support by our state’s leaders for  the Paris Agreement, which commits to keeping global warming to well below 2 degrees Celsius.

This report examines the carbon emissions enabled through continued permitting of new oil and gas wells. It further quantifies the impact of a managed phase-out of existing wells, beginning with a 2,500-foot buffer zone around sensitive areas. Finally, it explains the need for an ambitious just transition plan that protects workers and communities in the shift to a climate-safe economy.

As a wealthy oil producer, California is well positioned to take more ambitious action to proactively phase out its fossil fuel production and has a responsibility to do so in order to fulfill its commitment to climate leadership. We recommend that the state take the following actions: