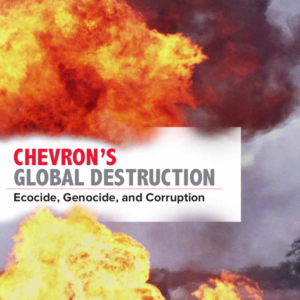 We already knew it wasn’t just Richmond. Amazon Watch has announced the release of a major new report, Chevron’s Global Destruction: Ecocide, Genocide, and Corruption. The report’s author,  Nan M. Greer, Ph.D., documents how Chevron, the world’s number one producer in greenhouse gas emissions among all investor-owned oil companies, violates national and international laws, abuses indigenous people, destroys local environments, and makes a major contribution to the climate crisis — country by country, all over the world.

The company has racked up more than $50 billion in judgments and settlement debts it refuses to pay.

“When Chevron loses these cases for large amounts, their approach is never to accept defeat and do the right thing, but to undermine the process and attack the very people who beat them in court,” said Paul Paz y Miño, Associate Director of Amazon Watch, in a press release announcing the report.

The press release cited the case of Steven Donziger, the Manhattan-based attorney, a key lawyer on the team that won the world’s largest pollution lawsuit against Chevron for dumping billions of gallons of toxic oil waste onto Ecuadoran Indigenous ancestral territory in the Amazon.

“Despite the United Nations calling for his immediate release, he has spent over 800 days living under house arrest in his New York apartment for a bogus contempt ruling issued by a judge with direct ties to Chevron. It just further demonstrates Chevron’s impunity, abuse of the U.S. legal system, and lack of respect for the law,” stated Paz y Miño. Donziger has since been convicted of criminal contempt and is currently in federal detention.

The announcement also reported that Chevron is guilty of “vicious attacks” against indigenous people. “The corporation has created a legacy of genocide, death, loss of ancestral land, torture, forced labor, rape, and violence against women,” said Greer, author of the new report.

Based on public records of documented abuses, the report finds that: