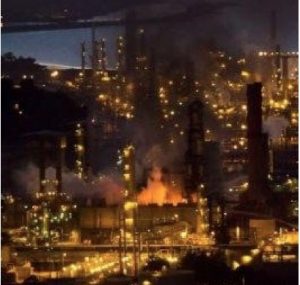 A new study provides detailed analysis of the specific ways Bay Area refineries are damaging our health. Air Pollution in the Bay Area’s Refinery Corridor, by the national research organization Fracktracker Alliance, reports that the petrochemical industry is the largest stationary source of health-harming pollutants in the Bay Area.

Other key “takeaways” include:

The report details the specific pollutants issued from each refinery and the ways each pollutant harms human health.

The Fracktracker Alliance issued this report April 28 specifically to provide data showing the need for immediate numerical caps on refinery emissions. A worker-community alliance has been demanding these caps for more than a year. The Bay Area Air Quality Management District (BAAQMD) staff has been delaying consideration of this demand, but is finally scheduled to vote on the issue of numerical caps in a meeting of the BAAQMD board June 15.

The full report is available here.