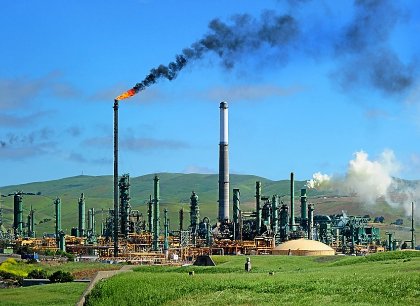 An exciting new website allows refinery communities across the country to finally access air quality data that refiners and government regulators have been putting out of reach.  Launched this last week,  RefineryAirWatch.org is a collaboration between the Fair Tech Collective founded by Dr. Gwen Ottinger, graphic design firm SAYGRID, and a coalition of residents from our own refinery-adjacent communities here in the Bay area.  Congratulations, Benicia refinery activists!

From the press release:

“Refineries are being forced to measure toxic chemicals they release. But they still don’t want the people next door to know what they’re breathing,” said Dr. Gwen Ottinger, Associate Professor at Drexel University in Philadelphia.  “That’s where Refinery Air Watch comes in.”

The site lets users download air quality data that industry and government-run websites make hard to access. It calls out refineries that take measurements but don’t make them available for download by the public, and it exposes widespread failures by the oil industry to support communities’ right to know. Out of 116 U.S. refineries, only twelve measure chemical concentrations continuously or collect data about more than one pollutant.

“In our community,” Benicia, CA resident Constance Beutel said, “we went fifteen years with undisclosed toxic emissions from the Valero refinery. There was no monitoring in the community, so we didn’t know how dangerous our air had become.”

Beutel’s group, the Good Neighbor Steering Committee, eventually established the Benicia Community Air Monitoring Program, which measures hazardous pollutants at five-minute intervals and has publicly available data. Getting the program going was incredibly significant for the community, Beutel said: “Without actual real-time data, we in the public are unaware of the health risks and dangers we live with daily. Having RefineryAirWatch.org as a resource for us and other communities is a huge step forward for the public.”

Refinery Air Watch makes data available for download. It also uses standardized measurements of benzene, required by the Environmental Protection Agency to be taken at refineries across the U.S., to show which refineries have the greatest impact on neighbors, which states have the worst polluters, and which corporations are responsible. Site designer Andee Mazzocco of SAYGRID notes, “We collected data from a federally mandated data dump and transformed it into meaningful information citizens can easily access and rely on.”

“This is an environmental justice issue,” said Ottinger. “Six million people live within three miles of an oil refinery, and they’re more likely than other Americans to be people of color, low income, or both. We know that toxic emissions from refineries are one more manifestation of structural racism. But we can’t understand the full extent of the problem if we’re not insisting that refineries measure their pollution and make the data readily available for communities, scientists, and investigative journalists to analyze. Refinery Air Watch sends the message that regulatory agencies need to drastically improve their requirements for air monitoring and data access.”