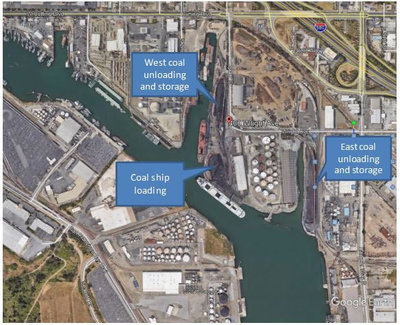 The Richmond City Council took its first step on December 18, 2018 toward ending the shipment of coal and petroleum coke (pet coke) through the city.  These toxic commodities are shipped overseas from the privately-owned Richmond Levin terminal.

The Richmond City Council is considering legislation to phase out and ultimately end the use of the terminal for coal and pet coke.  At the council meeting yesterday, about a dozen people spoke in support and no one spoke in opposition to an initial draft of the legislation. Council members voted unanimously to submit the proposed ordinance to the city attorney for review.

The proposed ordinance would prevent new facilities from handling large amounts of coal and pet coke.  Existing facilities that are non-compliant would not be able to increase their handling of these commodities.  The ordinance defines an amortization period, during which non-compliant facilities will be required to reduce and finally eliminate the handling of coal and pet coke.  Five years was the recommended amortization period, but the city attorney may consider alternatives.

While activists in Oakland and Vallejo have organized to prevent the construction of terminals to ship coal, Richmond is already burdened by coal pollution.  The coal arrives at the Richmond Levin terminal in two ways: on partially-loaded ships from Stockton, and on open rail cars to top off those ships; the Stockton Deepwater Channel through which coal is transported is too shallow to accommodate fully-loaded freight vessels.  Dangerous particulate matter escapes both from the trains and from the uncovered coal and pet coke piles at the terminal.  The dust is visible on homes and cars and invisible in the lungs of Richmond residents, some of whom live within 100 feet of the rail line.

The proposed ordinance is an important step toward eliminating these toxins, which constitute much more than a local health hazard: Coal is the fossil fuel most responsible for climate change.