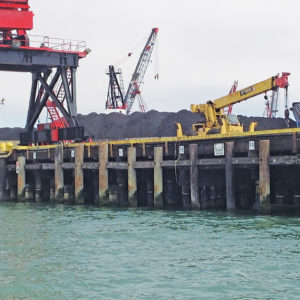 Help get coal export shipments out of Richmond—despite Mayor Tom Butt’s recent tricky attempt to derail our efforts while everybody was off celebrating a holiday.

Just before Easter weekend, the mayor put a proposal on the Richmond City Council consent calendar for the following Tuesday: prohibit new coal and petcoke facilities and prevent expansion of existing facilities (at the Levin-Richmond Terminal). Sounded good—the proposal even cited statistics on the serious health effects of coal dust.

However, a closer look revealed the real motive: if passed, it could have created a legal basis for grandfathering in the terminal’s coal operations. More importantly, it failed to include No Coal in Richmond’s central demand: to phase out coal handling and storage at the terminal. But quick action by our organizers saved the day.

Fast-forward two days to the North Richmond Earth Day celebration, where a No Coal stalwart was tabling. When Contra Costa Board of Supervisors President John Gioia stopped by, she alerted him to the proposal. Gioia, an ally since NCIR’s first meeting in 2017, sent a letter to the council that included the following recommendations:

“As part of approving Mayor Butt’s proposal tonight, the Council should also: (1) direct that the City continue to move forward with its previous direction to develop an ordinance to phase out existing operations, and (2) clarify that even after the zoning change, there needs to be further review of the City’s permit records before making a final determination that the existing coal/coke facility is a ‘legal non-conforming use.’”

The mayor’s proposal passed with the addition of Gioia’s language.

What does this mean for the campaign?
 Despite the short notice, fifteen supporters, including Gioia’s community liaison, showed up and waited 2-1/2 hours to advocate for a ban on coal.
 Five out of the six council members present voted for the amended proposal.
 The Richmond Coal Ordinance edged closer to the front burner.
 The terminal’s lack of a permit for coal operations was reiterated.

It also means that NCIR will continue to fight to get coal outta Richmond. All are welcome to join this community EJ campaign:

And be sure visit No Coal in Richmond to sign the letter and learn the many ways you can get involved.
Together, we’re going to win this one!