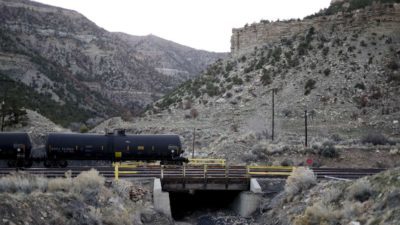 Our Utah allies in fossil fuel resistance—we bonded to stop Utah coal from being shipped out of Oakland—are now down to the wire in their efforts to stop a terrible oil train project threatening a magnificent Utah forest and the Colorado River.  Please support them by signing this letter to Secretary of Agriculture Tom Vilsack, who has the authority to stop the project.

The U.S. Forest Service has approved a plan that would allow oil trains more than a mile and a half long to be routed through twelve miles of  protected roadless area in the Ashley National Forest and travel along the Colorado River.  Nearly all the railway—with a planned five bridges and three tunnels—would be on public lands protected by the Roadless Area Conservation Rule.  This is all about massively increasing oil production in the Uinta Basin of Utah by billions of gallon of oil annually and transporting it to refineries in Gulf Coast communities already suffering from fossil fuel pollution.

U.S. Secretary of Agriculture Tom Vilsack, who oversees the Forest Service, can stop this in its tracks.  Tell him to say no to this dirty and dangerous project.

Burning all the additional oil enabled by this project would create more carbon pollution than the amount produced by the nation’s three largest coal-fired power plants combined.  This dangerous plan would send oil trains along the Colorado River corridor for hundreds of miles, increasing the risk of fires and oil spills into waters relied upon by 40 million people in the West.

Along the way, the rail line would strip bare and pave over 10,000 acres of rare plants and wildlife habitat.

Sec. Vilsack has pledged to take bold action to address the climate crisis.  Tell him to follow through by rejecting the Uinta Basin Railway.