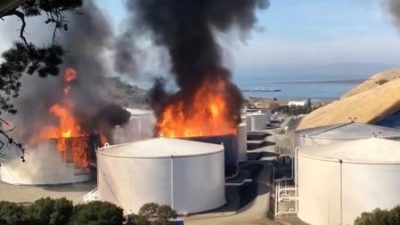 A long-anticipated report about the massive October 15, 2019 NuStar tank farm fire has finally been released, a full eighteen months after the catastrophe. It confirms what many of us suspected—and more.  Not only did we dodge an even bigger conflagration that day, but years of compounded errors and bureaucratic negligence culminated in a completely preventable and dangerous event on the Bay Area’s refinery corridor.

The fire that consumed two ethanol-filled tanks at the NuStar facility, which lies next to the Phillips 66 refinery in Rodeo, caused thousands of terrified people in the cities of Crockett, Rodeo and Hercules to shelter in place for over seven hours.  County health authorities ordered them to shut off their fans and air conditioners and seal off their windows and doors with tape or wet towels to prevent them from breathing hazardous particulates.  Traffic was stopped both ways on Interstate 80 until the massive blaze was finally contained.  (The fire raged from 2 PM that day until it was completely contained by 10 PM.)  By all accounts, we were “lucky” that the ethanol-filled tanks had been at low capacity, the wind was low that day, and the ensuing grass fire was confined to a few acres.

NuStar is one of several refining and fuel storage facilities that line the Carquinez Strait, a major shipping thoroughfare and the second largest oil hub on the West Coast.

The Contra Costa County Fire Protection District Incident report, and participants at the County meeting to discuss its findings, noted that:

Some mitigation measures are already in place, and the County intends to move quickly on extending the jurisdiction of its Industrial Safety Ordinance to include tank farms. However, locals who lived through the event still have many unanswered concerns. In the words of a long-time Crockett resident, “So will heads roll?” A quake the day before on a nearby fault—which caused flaring at local refineries—struck some as a probable cause of the NuStar explosion, although this was explicitly rejected in the report.” So why did the report dismiss the relevance of the earthquake the night before,” a woman asked, “especially when the vibration of fuel can cause static build-up?” Others wondered about the very location of the tank farm, which is sited over a creek and built on “60 feet of alluvial sediment.”  As one resident commented, echoing the sentiments of many community members at the meeting: “A tank farm built in a liquefaction zone without a permit?  That would be a hard bell to unring in a lawsuit.” 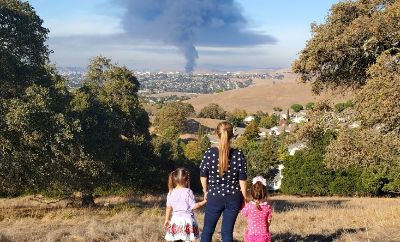