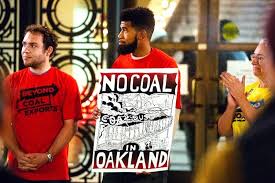 Please show up for the next chapter in the campaign to keep coal out of Oakland!  On Tuesday, May 3, the city council will vote on whether to hire Environmental Science Associates to review the extensive evidence about the health and safety dangers of coal.

Let’s insist that the city council put the vote on banning coal on their calendar. They have promised this vote before the summer recess, but that may not be possible within the timetable ESA proposes.   We have had more than enough delays!

The proposed contract with ESA does not include any public health experts or reflect any public health expertise.  The council wants a review of the evidence in order to back up an ordinance banning coal from OBOT, the bulk marine terminal to be built at the former Oakland Army Base. The ordinance requires findings that coal would place residents and workers “in a condition substantially dangerous to their health or safety.”

At the council meeting, speakers can support the independent panel and criticize the city for not hiring such experts themselves.

No Coal in Oakland and its allies strongly criticized the initial proposal from ESA because it was expensive and time-consuming, and because ESA has frequently minimized public health concerns. Most recently they wrote an Environmental Impact Report on a crude-by-rail proposal from the Valero refinery in Benicia. Their report was widely criticized by oil industry and health experts, as well as by California Attorney General Kamala Harris.

In response to our concerns, the city asked ESA to modify their proposal for a shorter and less expensive review.  But the revised plan still did not include any public health experts.

On April 14, public-health experts, led by Health Impact Partners (HIP), submitted to city officials an outline of a proposal to do their own review of the evidence.  Based in downtown Oakland, HIP is a national leader in the field of health-impact assessment. They proposed to work with PSE Healthy Energy, an Oakland-based energy science and policy institute. They also proposed to create a panel to review their work, consisting of Bay Area public health experts with a variety of backgrounds, including environmental health (air quality, water quality, and noise), environmental justice, occupational health and medicine, and epidemiology.

Given this response, the public health experts decided to create their own independent panel.  This group has already begun to meet and review the evidence.  They will write a report documenting the danger  of coal shipping to health and safety and will be prepared to critique any inadequacies and inaccuracies in the ESA report.

There was some discussion by city officials of the possibility of hiring one public health expert on a fee-for-service basis.  However, this offer stalled. The public health expert tried for more than a week to contact the city to discuss this possibility and got no response. That’s when the independent panel decided to move forward on their own.  Time is short and the process cannot wait.

So at this point we are not asking the city to hire any public-health experts.  This essential review will be done by the experts who have stepped forward on their own to protect the health and safety of Oakland residents.  We appreciate their initiative and will be supporting them to do this essential work.

How to participate in the meeting

The public can speak on city council agenda items, although each speaker gets only one minute.  It is possible for others to “cede time” to allow a speaker an additional couple of minutes.  We encourage our supporters to sign up to speak and cede time at the meeting.

You can indicate you wish to speak, name a person to whom you will cede your time, or leave this blank.  You can always cede time at the council meeting if you have submitted this form.

After entering your speaker-card form, you will get a confirmation number.  Bring this with you to the meeting.

Note that the lot behind City Hall on Clay Street has free parking after 4:30 p.m. on City Council meeting nights.

The lot behind City Hall on Clay Street has free parking after 4:30 p.m. on City Council meeting nights.