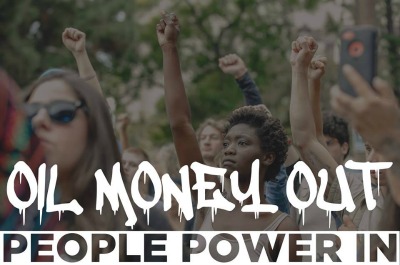 Join Oil Money Out for a press conference and petition delivery in advance of Governor Brown’s State of the State Address.  Oil Money Out is calling on the Governor and our elected officials to get oil money out of California politics!  Activists, community members, health professionals and other experts will gather at the state capital to send a clear message to California lawmakers, demanding they listen to state scientists who have determined that fracking is dangerous for California.

An Oil Money Out petition with more than 75,000 signatures will be delivered to Governor Brown.  We are calling on Governor Brown to take bold action during his final year in office in order to solidify his legacy as a climate leader.  Real climate leaders prioritize public health over industry profits; they don’t enable the worst climate polluters and allow fracking and dangerous drilling to expand.

During the last legislative session, Big Oil spent an historic $36.1 million to lobby California lawmakers—more than any other industry.  Efforts to protect the environment have been thwarted because of the financial power of oil money and Californians are fed up with pay-to-play politics.  It’s time for our elected officials to put public health first and prioritize people over profits.  #OilMoneyOut #PeoplePowerIn!

Accessibility: The press conference will take place on the north steps of the Capitol where we will be spread across the steps, including at ground level.   Participants will stand for roughly 15 minutes during the conference on concrete.  ADA parking spaces are available in a parking garage on 10th and L less than one block from the capitol building. The nearest light rail station is 1 block away on O and 11th and multiple bus lines stop in front of the capitol building.  If you have accessibility needs you’d like to discuss, please email Damien Luzzo at damien@rootskeeper.org .