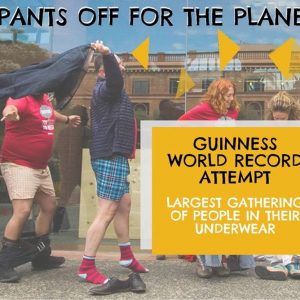 Strip down to your underwear along with thousands of friends gathering to protest the climate impact of the fashion industry. This event in Golden Gate Park will call on San Francisco’s Levi Strauss corporation to be an industry leader and transition the factories in its supply chain to renewable energy.

Stand.earth is hosting this event, which it hopes will get into the Guinness Book of World Records as the largest gathering of people in their underwear. They write:

“While we love fashion and looking stylish, the clothes we wear are really harmful to the planet and workers making our clothes. If the fashion industry were a nation, it would be the 4th largest climate polluter on Earth – just behind China, the United States, and India. Simply put, mass-produced clothes are #TooDirtyToWear.

“We’ll have music and festivities. This is a body-positive event open to all ages, gender identities, and gender expression. To qualify for the world record attempt, participants must be in underpants (boxers, briefs, panties etc.) and either a bra or black or white tank top.

By signing up you agree to be photographed and video recorded. The photos and videos will be used as evidence for breaking the Guinness World Record and by Stand. earth as promotional material about the #TooDirtyToWear campaign.”