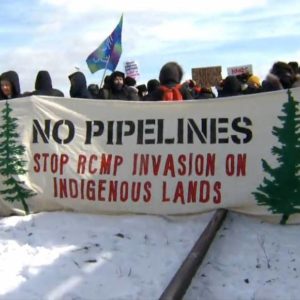 Right now in British Columbia, Canada, Indigenous Wet’suwet’en Hereditary Chiefs and land defenders are resisting the construction of the TC Energy Coastal GasLink pipeline slated to cut through their territories.

The Wet’suwet’en have been fighting to stop this pipeline for just over five years. The Hereditary Chiefs have re-asserted their right to jurisdiction over their own lands, their right to determine access and prevent trespass under Wet’suwet’en law, and the right to Free Prior and Informed Consent as guaranteed by the United Nations Declaration on the Rights of Indigenous Peoples — but TC Energy will not listen.

Protests against the Coastal GasLink project have since spread and have included: rail blockades, port shutdowns, government office occupations, and sit ins at banks investing in the illegal pipeline project. Now, the fight is coming to the U.S., right to the doorstep of the largest banker and investor of the Coastal GasLink pipeline — JPMorgan Chase and KKR.

JPMorgan Chase, the world’s biggest banker of fossil fuels, is helping funnel more than $5 billion in loans to the company behind Coastal GasLink. Kohlberg Kravis Roberts & Co. (KKR), a New York City based investment firm with over $200 billion in assets, has plans to purchase 65% of the pipeline with Alberta Investment Management Corp (AIMCo). Companies like Chase and KKR actively perpetuate the destruction of stolen Indigenous lands to fuel the climate crisis.

The upside is KKR’s plans to invest in the pipeline aren’t final. There’s still time to interrupt their plans. We must hold them accountable before it’s too late.

Sign the petition and rise up with the Wet’suwet’en people: Demand Chase and KKR defund the Coastal GasLink pipeline.