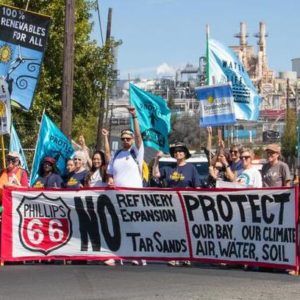 In a major victory for refinery neighbors, frontline community groups, and environmental organizations, on November 2, the Bay Area Air Quality Management District quietly dropped its review of the Phillips 66 refinery proposal to more than double oil tanker traffic at its Rodeo refinery.

The immediate reason was the refinery’s announcement of its plan to convert to producing biofuel.  But Sunflower Alliance and other members of what became the Protect the Bay Coalition had been fighting the marine terminal expansion for years, as part of the larger struggle to prevent an increase in shipping and refining oil from Canadian tar sands.

In an announcement of this victory, Stand.earth pointed out that activists will continue to fight the other major project that could enable an increase of oil shipping: The Army Corps of Engineers proposal to dredge deeper shipping channels in the parts of the Carquinez Strait leading to oil refineries.

Here’s a timeline of key events in this long struggle (thanks to Stand.earth for compiling this list):

In August 2017, more than 24,000 people submitted comments in opposition to Phillips 66’s marine terminal expansion during the scoping phase of the project.

In September 2018, Indigenous leaders from British Columbia traveled to California to join elected officials and local activists from the Bay Area for a panel highlighting the climate and air pollution connections between Canada’s Trans Mountain Pipeline and Phillips 66’s San Francisco Refinery expansion.

In March 2019, Sunflower Alliance and other local environmental and community groups hosted a town hall in Rodeo to discuss the risks of Phillips 66’s proposal to bring in more oil tankers and process more heavy crude oil like tar sands.

In June 2019, community and environmental groups formed the   Protect the Bay Coalition to educate the community about the health, climate, and spill risks from the expansion proposal at Phillips 66’s San Francisco Refinery.

In November 2019, the Protect the Bay coalition participated in a U.S. Army Corps of Engineers hearing on the proposal to dredge San Francisco Bay, submitting a petition signed by more than 18,600 people opposing the project.

In April 2020, the Protect the Bay coalition helped organize more than 9,700 people who submitted comments in opposition to the U.S. Army Corps of Engineers proposal to dredge San Francisco Bay.