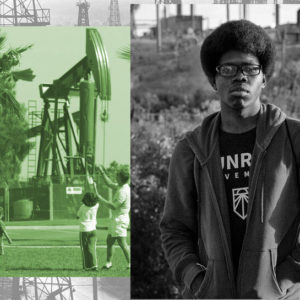 In the video, Josiah Edwards describes growing up in L. A County as “a black kid with asthma,” surrounded by oil wells and refineries.

“I want you to be angry,” he says, at the recent defeat of AB 354, a California bill that would have created 2,500-foot buffer zones between oil and gas wells and “sensitive” areas like homes and schools.

Edwards says when he was growing up, “My parents always worried about my ability to just breathe.” His middle school was a few miles from one of the biggest refineries west of the Mississippi.

He cites data about the serious health damage people suffer from living near wells and refineries — mostly people of color: “Neighborhood drilling is one of the most visible forms of environmental racism.”

And he tells the shameful story of the defeat of AB 345, in a 5 – 4 Senate committee vote in which three Democratic senators voted no: Ana Caballero, Ben Hueso, and Bob Hertzberg.

He points out the hypocrisy of California’s claim to be an environmental leader: “The state may be phasing out gas-powered cars, but it’s still legal to put an oil well right next to an elementary school.”

And he encourages all of us to demand that our lawmakers protect communities of color from this serious damage to their health. He concludes by pointing that just because this threat is now concentrated in communities of color, “doesn’t mean it’s not going to get to you.”