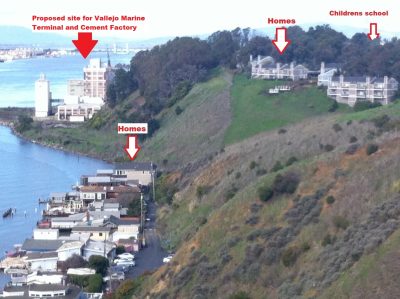 Vallejo’s proposed 40-acre marine terminal (VMT), which includes the controversial Orcem cement plant as its tenant, could be used to ship pet coke and coal.  The Draft Environmental Impact Report for the project acknowledges the possibility that petroleum coke will be moved through the facility.  Although it declares that there will be no shipping of coal, it also states that this could be revised in the use permit.  That portion of the DEIR  discussing “break bulk” commodities contains the loopholes that could allow coal and coal byproducts.

The adjacent property is leased by Kiewit,  a major construction company (Oroville Dam and Bay Bridge repair) that originated as a coal mining outfit and is still heavily involved in coal production.  From its website:

For nearly 70 years, Kiewit Mining Group has grown steadily to become one of North America’s leading producers of high-quality, high-energy coal and is ranked as one of the top 10 coal producers in the nation.  We are built on a solid foundation of safety, quality, production and integrity.  Today, we own or manage four surface coal mines located in Wyoming and Texas and manage one phosphate operation located in southeast Idaho. We also have expanded our North American mining ventures into the Oil Sand Regions of Canada.

Vallejo continues its three-year battle against the proposed ORCEM cement factory on the waterfront, and now faces the prospect of toxic pollution from coal dust.  Learn more and demonstrate your solidarity with the community by showing up at this Sierra Club press conference.