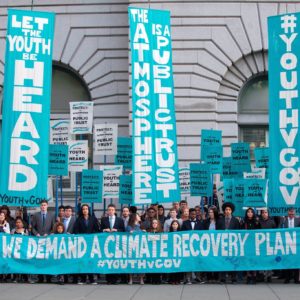 Rally to support the  #youthvgov plaintiffs in Juliana v. United States. They are suing the US government for knowingly violating their constitutional rights for over 50 years by contributing to climate change.

In response to a request by the Trump administration, the Supreme Court recently decided to delay their trial, which had been scheduled for October 29. The youth have filed a response requesting that the trial proceed on October 29.

Whatever the outcome, supporters will rally at the federal courthouse in San Francisco to be a part of the #TrialoftheCentury and support these young climate warriors.

The youth who filed the suit are demanding  a science-based National Climate Recovery Plan. This plan would end the reign of fossil fuels and require the United States government to do its part to stop dangerous climate change for young people and all future generations.