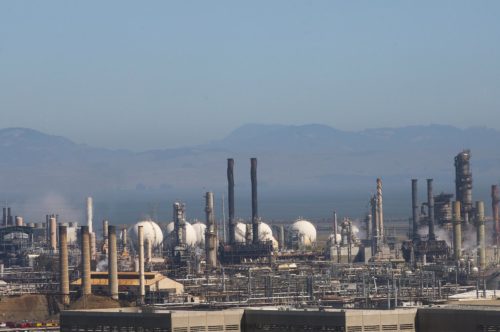 The Stationary Source Committee of the Bay Area Air Quality Management District’ (BAAQMD) addresses large, immovable sources of Bay Area pollution like oil refineries and other facilities.  On Wednesday, they’ll be hearing an update from Chief Air Pollution Control Officer Jack Broadbent about progress on Rule 6-5:  Particulate Emissions (PM) from Petroleum Refinery Fluidized Catalytic Cracking Units.*  They’ll discuss the rule’s emissions limits, respond to the public letters submitted by Communities for a Better Environment, Sunflower, 350BA and others, and hear more feedback from us.  To quote BAAQMD, this update will include “the results of the dispersion modeling of directly emitted fine PM2.5 from the Chevron Richmond Refinery, one of the refineries affected by proposed amendments to Rule 6-5.”  The findings should be pretty significant, as they will “show areas of concentration impacts and allow for estimates of exposures in nearby communities, from all sources at the facility and from the fluidized catalytic cracking unit alone.”

It’s just common sense to assume that the area of impacts from Chevron is larger than its immediate vicinity.  The modeling that will be presented should make that larger area of impact unambiguously clear.  Here’s what we already know from the staff report:

To counter this, Richmond community members and residents of other refinery communities should speak about the ways that pollution negatively affects your community’s health—the socioeconomic impacts not usually considered by regulators.  Committee members need to hear specifically about impacts to health that cost money, time, and energy; about having to take time off work, be less productive, or go on disability; anything around the devaluing of housing or land costs because of proximity to large pollution sources; or of new businesses not coming to your area.

The agenda can be found here.

* A fluidized Catalytic Cracking Unit (FCCU) does all the heavy lifting in refineries, converting high-molecular weight hydrocarbon fractions of petroleum crude oils into more valuable gasoline, jet fuel, and other products.  Aren’t you glad you asked?

From you computer via phone or Zoom