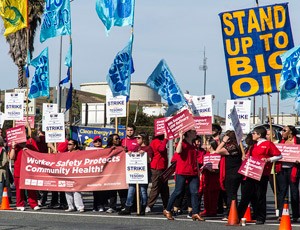 Following a full vote by their membership, United Steelworkers Local 5, representing workers at the Tesoro and Shell refineries in Martinez and the Chevron Richmond Refinery, reaffirmed their support for refinery-wide limits on toxic and greenhouse gas emissions.

As part of the Refinery Action Collaborative, USW Local 5 has been fighting for the Bay Area Air Quality Management District (BAAQMD) to incorporate these emission caps for the last four years. In their original statement of March 27, 2015, USW International and USW Local 5 joined the Asian-Pacific Environmental Network (APEN), the BlueGreen Alliance, the Labor Occupational Health Program at U.C. Berkeley, Communities for a Better Environment (CBE) and the Natural Resources Defense Council  (NRDC) in calling on the Air District to include in their proposed Rule 12-16 regulating refinery emissions:

“limits on each refiner’s total, facility-wide toxic, criteria, and greenhouse gas pollution emissions that are equal to the most recent calendar year or most recent three-year average of each pollutant currently reported….”

In yet another move by the refineries to divide workers and the community, postcards from supposed “refinery workers” have recently been flooding frontline communities, targeting our elected representatives on the Air District Board of Directors, and trying to spread opposition to these limits. The vote by Local 5 members puts the lie to this strategy.

In February of 2015, Sunflower Alliance, CNA, CBE, 350Bay Area, APEN and many other climate and environmental justice groups stood in solidarity with the members of Local 5 in their strike against the Martinez Tesoro refinery. In their letter of April 8 (see below) to Eric Stevenson (Director, Technical Services Division BAAQMD), USW Local 5 showed again that solidarity between workers and frontline communities is the path forward to health and safety for our communities and the climate. 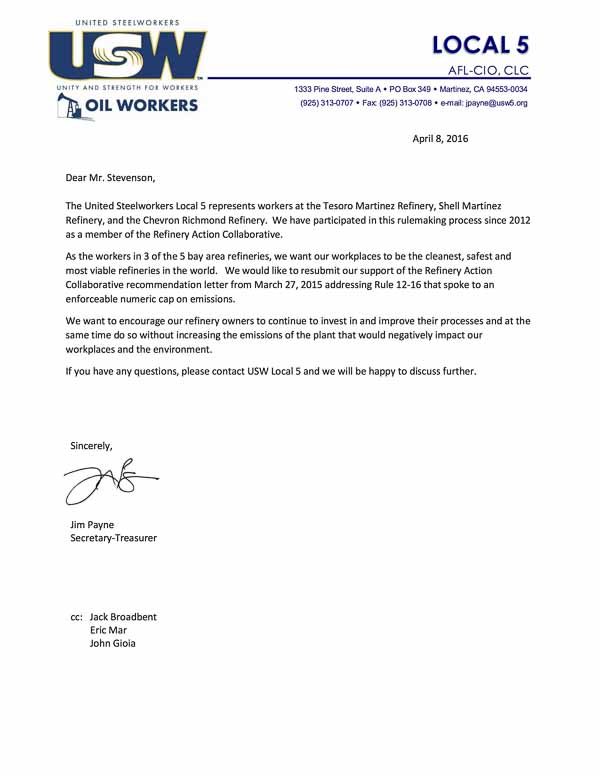 For the latest news on the emissions cap and BAAQMD see: