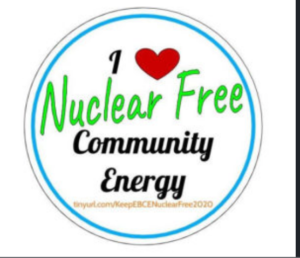 Many San Franciscans recently joined in a widespread public outcry when they learned about a loophole in Clean Power SF’s policy of rejecting nuclear energy.  Because of that outcry, the San Francisco Public Utilities Commission unanimously voted to close that loophole July 14, putting a complete ban on all use, purchase, or exchange of nuclear energy by CleanPowerSF, San Francisco’s community choice energy program.

PG&E’s nuclear deal was also presented to each of the other
community-based clean energy programs (known as Community Choice
programs) in its service territory. Since PG&E’s initial proposal in
2019, community choice advocates, other environmental and climate
activists, and environmental justice organizers, have risen up to denounce
the idea that nuclear is a “clean” energy source, and to
demand that such deals be rejected.

When San Francisco residents discovered the nuclear-deal proposal on the June 23 agenda, a broad array of community stakeholders demanded that it be removed. So the item was delayed to the July 14 meeting.  Then Commissioner Sophie Maxwell and SFPUC staff reached out to stakeholders
to engage a dialog about the proposal. On July 14, after hearing overwhelming rejection
of the nuclear deal from stakeholders, SFPUC staff and the Commission
dramatically amended the proposal to transform it into a complete ban
on all use or exchange of nuclear energy by the CleanPowerSF program.

Eric Brooks, Coordinator of Californians for Energy Choice said, “This
is a big victory for the clean energy movement, and will help us in
ongoing efforts to shut down PG&E’s dangerous Diablo Canyon nuclear
power plant much earlier than its currently planned 2025 closure date.”