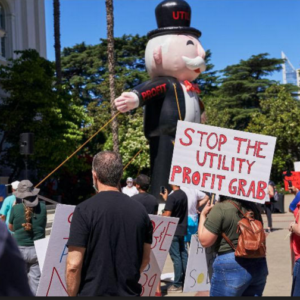 Join the Save California Solar coalition at the State Capitol calling on Gov. Newsom to stand up to the utility companies’ scheme to kill rooftop solar. PG&E and its partners in crime are lobbying the Public Utilities Commission for a change in rules that would make rooftop solar prohibitively expensive for most people.

More than 100,000 people have signed a petition calling on Newsom to stop this ecocidal injustice. Join the event to deliver this petition: People from all over the state will stand together in front of the Capitol using solar panels to create a “human billboard” calling on the governor to take action. Then coalition leaders will march to the governor’s office and deliver the over 100,000 public comments in support of affordable solar.

The investor-owned utilities tried to get this plan through the legislature last year but advocacy by solar companies, solar-panel owners, and environmental activists stopped them. So this year they’re turning their big lobbying guns and money on the CPUC.

The CPUC is scheduled to release their preliminary decision on December 10, followed by a comment period (probably 30 days)

Here’s how it would work:

The state currently has a rule governing “net energy metering” — that means how much financial credit rooftop solar users get for selling excess energy back to the system.

The new scheme by the utility companies would

The combination of this flat fee and reduced rate, would result in many customers seeing nearly zero economic benefit from their solar panels. It might even cost more money to have solar panels.

Sign the petition to Governor Newsom, asking him to stop this power and profit grab — and pass it on.