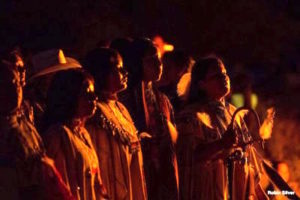 The fate of Oak Flat, a sacred site in Arizona, is once again in the hands of the courts.  The Ninth Circuit Court of Appeals, located in San Francisco, is scheduled to hear the case on October 22.  Activists in the Apache Stronghold will be there—after making stops along the way to pray and gather support on a “spiritual convoy” to prevent the land’s destruction by a mining monolith.

Oak Flat, known in Apache as Chi’chil Bildagoteel, is a sacred site in Arizona’s Tonto National Forest where Native Americans have gone to worship, pray and conduct religious ceremonies since time immemorial.  The federal government protected the sacred site for more than six decades.  But in 2014, a rider was attached to a must-pass defense bill directing the government to transfer the land to Resolution Copper, a foreign-owned mining company, which plans to construct a mine that would reduce the sacred site to a nearly two-mile-wide, 1,100-foot-deep crater.

Apache Stronghold sued the government in federal court, arguing that the destruction of their sacred site violates the Religious Freedom Restoration Act (RFRA), as well as an 1852 treaty promising that the United States would protect their land and “secure the permanent prosperity and happiness” of the Apaches.  After the trial court declined to halt the land transfer, the Apache Stronghold filed an emergency appeal to the Ninth Circuit Court of Appeals.  Just six hours before the government’s response was due, the government announced that it would withdraw the environmental impact statement that triggered the land transfer, delaying the transfer for several months. 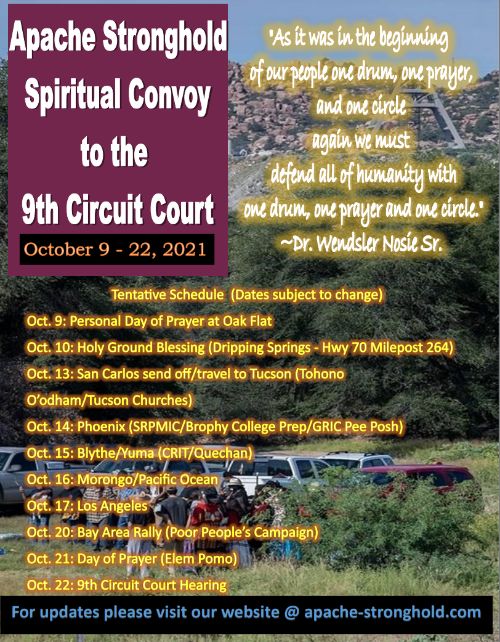 The Poor People’s Campaign is organizing local actions around this hearing.  Mark your calendars for activities including an art build, a rally and a prayer vigil.  (While you’re at it, watch this video to learn more about Oak Flat.)  More details will be available next week.

But you can act now to help save Oak Flat.

Contact your members of Congress and ask them to protect Oak Flat by keeping the H.R. 1884 Oak Flat withdrawal language in the budget reconciliation bill.  Find your representatives and senators or call the Capitol switchboard at 202-224-3121.