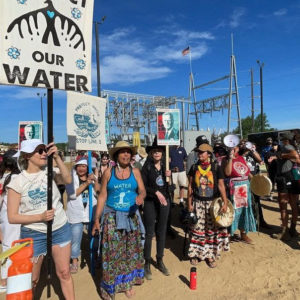 Support Indigenous water protectors and their supporters as they vow to continue their struggle to stop the Line 3 pipeline after two recent legal setbacks: The Minnesota Court of Appeals and the US. Department of Justice both upheld permits allowing developer Enbridge to build a tar sands oil pipeline through indigenous land and sensitive waterways, including the headwaters of the Mississippi River.

More than 2,000 people from all over the continent gathered at Line 3 construction sites in early June, many arrested for blocking construction. The Anishinaabe people, (legal owners of the land according to treaties) and their supporters are determined to continue the struggle with direct action and legal appeals.

And they are asking everyone to support them by contacting President Biden, who has the power to stop Line 3 by revoking the US Army Corps of Engineers permit.

Call the White House and Climate Office of Gina McCarthy by dialing: 888-724-8946. Tell them: “President Biden must honor the treaties and protect our climate by stopping the Line 3 tar sands pipeline now.”

You can also send a message to the White House here.

Donate generously to Honor the Earth or directly to the frontline defense.

Sign the 350.org petition to Biden here. Ask him to review the permits granted by Trump and immediately stop construction on this tar sands pipeline.

And pass these actions on to everyone in your networks. This is a crucial battle for indigenous rights, environmental justice, and climate health. We need everybody.

On December 16, 22 Water Protectors were arrested for blocking pipeline construction—a blockade that began in early December, when two determined Water Protectors began tree-sits in a frozen Minnesota forest targeted for leveling. The resistance and number of arrests have only increased since then. This video brings you there.

Tribal nations and local groups are seeking an injunction to stay construction while pending lawsuits are considered. We have seen other pipeline struggles, and this one is even more fraught. There are massive health risks involved in building Line 3 during the COVID-19 pandemic. Nonetheless, the pipeline developer, Enbridge has established multiple worksites along the Line 3 route with temporary housing facilities, or man camps, for its workers. It’s not only workers who are imperiled: man camps result in serious physical harm to women in nearby Indigenous communities.

There are many reasons to stop this project. From the Stop Line 3 website:

The existing Line 3 is an Enbridge pipeline that ships crude oil from Alberta to Superior, WI. It spans northern Minnesota, crossing the Leech Lake and Fond du Lac reservations and the 1855, 1854, and 1842 treaty areas. A ticking time bomb, it was built with defective steel in 1961, has had numerous ruptures and spills, and is now running at half pressure due to severe corrosion. Instead of cleaning up this liability, Enbridge simply wants to abandon it in the ground forever and cut a brand new energy corridor through our best lakes, wetlands, wild rice beds, and the heart of Ojibwe treaty territory. They first proposed this new route for the Sandpiper pipeline in 2013, but years of fierce resistance in Minnesota drove them to cancel that project and buy a share of the Dakota Access pipeline instead.

At $7.5 billion, the proposed new Line 3 would be the largest project in Enbridge’s history and one of the largest crude oil pipelines in the world, carrying up to 915,000 barrels per day of one of the dirtiest fuels on earth: tar sands crude. They call it a “replacement,” but it is larger, with higher volume, in a new corridor. First Nations, tribal governments, land owners, environmental groups, and communities across the Great Lakes have been fighting for five years now to stop this new corridor and #StopLine3. We are here to protect the water and our future generations.