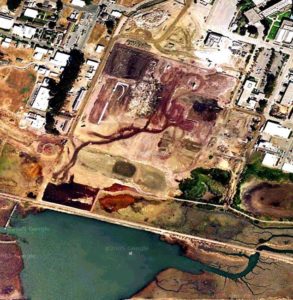 Help stop the move to rush through approval of a huge mixed-use development on the most contaminated Superfund site in the state. Tell the lame-duck Richmond City Council to hold off approving the Development Agreement for the Campus Bay development.

The community has been demanding a robust cleanup of the Richmond South Shoreline site for over 17 years, and in 2018 the city council voted unanimously for a cleanup to residential standards. However, when a more developer-friendly majority came to power, they reversed that decision. Now project supporters on the council, led by the mayor, are poised to rubber-stamp the Development Agreement before the newly-elected progressive majority takes office on January 12.

Defying logic, reason, and the will of the community, the Richmond Planning Commission voted unanimously on November 19 to approve the project—in outline only, because no detailed project plans are available. The project now moves to the city council for a final vote on Tuesday, December 1.

At the virtual Planning Commission hearing, the chair deliberately locked opponents out of the screen and refused to recognize their raised hands. Nonetheless, two dozen community members spoke about their fears that the many chemicals buried on the site would pose a health risk to potential future residents—one described it as a Love Canal waiting to happen. Residents directly across I-580 from the site, none of whom had received notice of the hearing, voiced concerns about airborne toxic dust from construction. Others addressed the potential effects of sea level rise and seismic activity on groundwater as well as the unknown synergistic results when the toxics mix with sea water.

Located on Richmond’s Southeast Shoreline next to the most heavily used section of the Bay Trail, the site was home to a Stauffer Chemical Company plant for more than 100 years. Stauffer produced sulfuric acid, manufactured agricultural products such as fertilizer and pesticides, and did metals research. It was acquired in the late 1990s by Zeneca, since merged into the pharmaceutical and agricultural chemicals giant AstraZeneca (2019 net income $1.227B). Described as one of the most contaminated sites in the state, the area meets all the criteria of an EPA Superfund site and contains more than 100 chemicals and metals. Such life- and health-threatening toxins are commonly found in landfills and in abandoned chemical treatment plants where dangerous chemicals were once used.

The development plan calls for a concrete cap to be placed on the site, covering up to 500,000 cubic yards of contaminated soil, and bioremediation measures. Once a cap is in place, there will never be an opportunity to conduct a thorough cleanup. The development would be larger than anything previously planned or built in the city. Deed restrictions include no schools, no daycare or senior facilities, and no contact with the soil.

Experts recommend that both a subsequent EIR and updated Health Risk Assessment be prepared before the city signs the Development Agreement. Both documents are out of date and do not reflect current science. Moreover, the EIR calls for a maximum of 1,500 residential units, 2,500 short of the 4,000 called for in the agreement.

The state Department of Toxic Substances Control (DTSC) has responsibility for overseeing the planned partial cleanup. However, the industry-friendly agency is insolvent and long overdue for reform, which would have been addressed by bipartisan bill AB 995 vetoed by Gov. Newsom last September.

The adjacent marsh is a protected area and offers visitors an opportunity to view the rare Ridgway’s rail at low tide. Each winter, thousands of migrating ducks and nesting shorebirds make their home in the East Bay Regional Park directly across the Bay Trail from the site.

Via Zoom. Visit Richmond Shoreline Alliance for instructions and password. The City is doing everything in its power to limit public comment, including the last-minute addition of a budget discussion that will push the item into late in the evening.

If you are excluded from commenting, please send an email to action@sunflower-alliance.org. Legal action is being considered because the city has been consistently violating public participation guidelines set forth in the Brown Act.