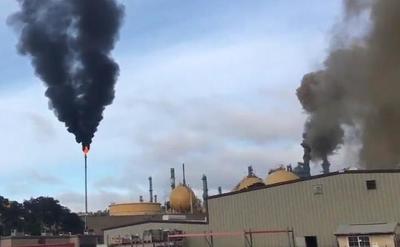 Please join community activists in Benicia as they persuade their city council to protect their health and safety and move forward with this draft of an Industrial Safety Ordinance modeled after Contra Costa County’s own ISO.  Benicia is, incredibly, the only refinery town in the Bay Area without an ISO.  Last year’s three-week Valero Flaring Disaster, triggered by a power outage at the refinery, put more than 80,000 pounds of sulfur dioxide into local air, and there has still been no official public report issued.  An ISO would greatly reduce the likelihood of an event like this, and its silent aftermath, happening ever again.

This disastrous flaring episode demonstrates the urgent need for Benicia’s adoption of an ISO like Contra Costa County’s.  Unlike the other four refineries in the Bay Area (all in Contra Costa), Valero is an “integrated refinery” where power loss in one area of the refinery impacts the whole facility.  In other refineries in the Bay Area, power outages can be isolated to parts of a refinery.

The four refineries in Contra Costa are subject to the local ISO which is built upon authority under the California Accidental Release Prevention Program.  According to the Bay Area Air Quality Management District’s Stationary Source Committee Chair John Gioia, Contra Costa County’s ISO is the strongest local refinery safety ordinance in the United States and has been recognized as such by the U.S. Chemical Safety Board.   Gioia writes, “The ISO has improved refinery safety in Contra Costa County since its adoption 1999.  The number of serious accidents has decreased during this time.”

The State of California has been considering adopting parts of it into statewide law to apply to all refineries.   The ordinance was passed by the Contra Costa Board of Supervisors in 1999 and is a risk-based program which requires that refineries install “inherently safer systems.”  It has many beneficial elements that make refineries safer.

There has been pressure around the state to adopt the regulatory safety structure of the ISO.   The public interest and safety of both Solano and Contra Costa residents would be greatly served if Benicia had such an ordinance.

Please come out to the Benicia City Council meeting and consider using these talking points during public comment.