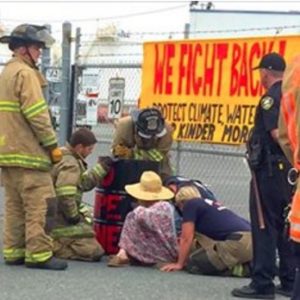 In the early morning of July 31, for the second Monday in a row, protesters locked themselves in front of the gates of Kinder Morgan’s Richmond facility, leaving tanker trucks stranded for hours while police and firefighters figured out how to detach the blockaders. Kinder Morgan is one of North America’s largest oil-infrastructure companies and is now attempting to triple the size of its pipeline that runs from the Alberta Tar Sands to the Pacific Ocean.

The planned pipeline runs through the land of several First Nations, who are fighting to stop it. The action for two consecutive Mondays, organized by Diablo Rising Tide, was a show of solidarity with the First Nations fighting the pipeline.

It was also part of the Bay Area’s fight against an influx of tar sands oil to local refineries. If completed, the project would deliver tar sands crude oil to ships for transport to refineries in Asia and the US West Coast, including the Bay Area. Increasing the refining of tar sands crude oil would not only further endanger the climate, but increase health and safety dangers to already polluted communities.

Diablo Rising Tide is raising money to bail out those arrested. Contribute here

See a video of the July 31 action here