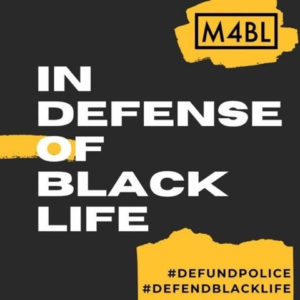 Join the uprising that’s fighting against racism and calling for basic change in the structure of injustice! Here are some ways to stay connected and participate:

The Movement 4 Black Lives asks you to:
“Join in calling on Congressional leadership to ensure that future action prioritize our communities over corporation and pushes back against the use of militarization in our communities as a response to this crisis.
“Sign on to push our elected officials to take brave and bold action to make sure our communities are not left behind!”

Sign up for updates from The Rising Majority, a national coalition formed in 2017 by the Movement for Black Lives and allied organizations “that seeks to develop a collective strategy and shared practice that will involve labor, youth, abolition, immigrant rights, climate change, feminist, anti-war/anti-imperialist, and economic justice forces in order to amplify our collective power and to build alignment across our movements [tobuild] a powerful anti-racist left for radical democracy.”

In the Bay Area, organizations fighting for black lives include:

Anti Police-Terror Project, a Black-led, multi-racial, intergenerational coalition that seeks to build a replicable and sustainable model to eradicate police terror in communities of color

Standing Up for Racial Justice Bay Area, part of a national network organizing white people for racial justice, as part of a multiracial majority for justice