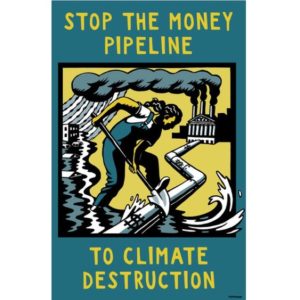 Join Stop the Money Pipeline in a national day of action, delivering letters to bank branches, insurance offices, and asset manager headquarters all across the country.  The letters make it crystal clear:  If you fund the Line 3 or Keystone XL oil pipelines, there will be consequences!

Covid-safe actions will deliver a cover letter here that is customized for each bank, which will be attached to a 10-page letter here from Indigenous women and other activists.  (They sent this letter to bank CEOs in October.  Because the bankers ignored it, we are resending hundreds of copies via the branch system.)  You would hand deliver this packet in an envelope in care of the manager of each branch you visit.

e in their bubble to help with driving, to record at least one visit with photo or video, maybe with a sign. We’ll ask you to make the delivery to 10-20 branches in your area at your convenience during business hours.

NOTE: A previously announced action by Silicon Valley Climate Action Network has been cancelled because of the new California cover restrictions.

Go to the national Stop the Money Pipeline website to find an action near you or information on  how to organize your own visits to financial institutions near you.

Your local branches of Wells Fargo, Chase, Bank of America,  and Citi.

The Line 3 and Keystone XL pipelines have several things in common.  They both violate Indigenous Nations treaty rights.  They would both be devastating for our climate.  And both are being met with fierce resistance on the ground, in the courts, and all across the country.

One other thing that the Line 3 and Keystone XL pipelines have in common is that they both require money to be built.

Right now, TC Energy, the company behind Keystone XL, is working hard to secure a $4 billion loan it needs to build the pipeline.  In March, Enbridge Energy, the corporation behind Line 3, has a $2.1 billion loan that is due for renewal.  Banks like Chase, Citi, and Bank of America could easily walk away from Line 3 then.  If they do, it will become that much harder for Enbridge to pay for the toxic pipeline.