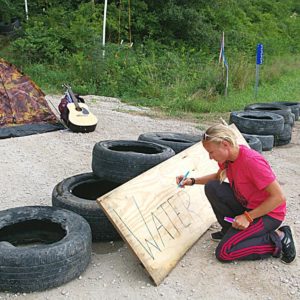 Join climate leaders and activists around the world to demand that Joe Biden stop the long-term imprisonment of Jessica Resnicek for taking direct action against the Dakota Access Pipeline.

Resnicek was sentenced to eight years in prison for using fire and welding torches to damage parts of the Dakota Access Pipeline, along with fellow activist Ruby Montoya. They expected short prison sentences for this act of civil disobedience, in which no people were harmed.

But the prosecutors succeeded in getting Judge Rebecca Goodgame Ebinger to add a “terrorism enhancement” to extend Resnicek’s sentence to eight years.  (Montoya is expected to be sentenced soon).

(The Justice Department did not seek the terrorism enhancement in the trial of the first January 6 Capitol rioter.)

For Resnicek, it would mean an eight-year prison sentence,   followed by three years supervised probation, and a restitution of $3,198,512.70 paid to Energy Transfer LLC.

Professor Julia Steinberger, a lead author with the UN’s Intergovernmental Panel on Climate Change, recently signed a letter with UN colleagues and over 400 other scientists & academics from 32 countries, which raises the alarm on this trend of activists being criminalized with longer prison sentences, police repression, and more, at a pivotal time in the fight against global heating.

Part of the letter reads, “Around the world today, those who put their voices and bodies on the line to raise the alarm are being threatened and silenced by the very countries they seek to protect. We are gravely concerned about the increasing criminalisation and targeting of climate protestors around the world.”

Domestic terrorism strategy has activists in the crosshairs.