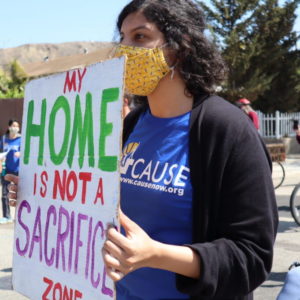 Join climate justice activists all over California in telling the California Air Resources Board (CARB) that its next climate plan must build a future beyond fossil fuels and ensure environmental justice.

CARB is now in the process of creating their 2022 Scoping Plan, a comprehensive plan for reducing our state’s greenhouse gas pollution. According to a background paper from the Sierra Club, the draft plan recommended by CARB staff:

Before CARB’s scheduled public hearing on the plan on June 23, join these efforts to tell CARB we need a plan that will stop fossil fuels and end environmental injustice.

Sign the letter to CARB from the California Environmental Justice Alliance (CEJA) and allies, calling for:

More info on CEJA’s critique of the draft plan here

Join the Sierra Club in telling CARB that any new plan should:
* reduce GHG emissions sooner
* ban new gas plants
* strengthen rules against emissions from heavy-duty trucks
* not rely on unproven and sometimes harmful Carbon Capture, Use, and Sequestration technologies.

Sign this petition by May 31, telling CARB to require all cars sold in California to be Zero Emissions Vehicles (ZEV) by 2030, not wait until 2035 as Governor Newsom has proposed.

We’ll add more opportunities to participate as they emerge.

Most important, plan to attend the hearing on the scoping plan 9 AM June 23, in person in Sacramento or on Zoom