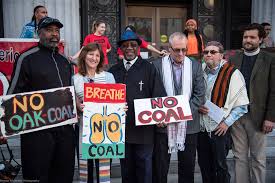 No Coal in Oakland asks our allies from throughout the state to join us in a statewide Call-in to Call-out Governor Brown on Monday, April 25th!

We are fighting a plan to transport up to 9 million tons of coal from Utah to Oakland for export overseas. Last July at the Vatican, Governor Jerry Brown said to the Pope that 90% of coal must stay in the ground to avoid climate disaster. Brown said at the Paris climate conference, “We are really a crucial element in making the fundamental change from a carbon intensive economy to one that is on the side of nature, and therefore sustainable.”

But what is our professed climate leader really doing for California? The answer is – not nearly enough!  We need to let Brown know that lofty proclamations are not enough while environmental destruction and local pollution continue unabated in his own state and hometown.

We are calling on Brown to:

1) – Publicly oppose the export of coal from the new bulk terminal being built in West Oakland. We are asking Gov. Brown to defend his fellow Oaklanders who already suffer the health consequences from the worst air quality in all of Alameda County.

2) – Affirm his support for Senator Loni Hancock’s two bills about coal and use the power of his office to promote and pass them.

Let Gov. Brown know that he can no longer remain neutral on a moving train!