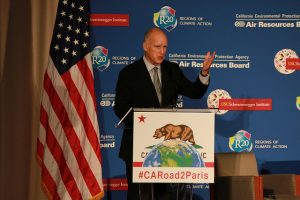 Rally to tell Jerry Brown: Clean energy begins at home! He’ll be in SF at a “Clean Energy Ministerial,” but he still hasn’t spoken out to oppose coal exports from Oakland or fracking in California.

Thursday morning Brown will be meeting in Union Square with international business and government leaders at a “Clean Energy Ministerial.” He claims to be a climate leader but still hasn’t joined the opposition to shipping coal – the dirtiest energy there is — from the Oakland terminal run by his business partner Phil Tagami.

Join No Coal in Oakland and others to remind everyone of Brown’s real record and demand that he step up to oppose coal in Oakland. Coffee will be provided.