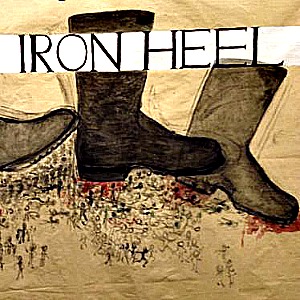 Based on the acclaimed novel of the same name, this production is a dramatic adaptation of the futuristic 1908 novel that accurately predicted the First World War, the rise of fascism, authoritarianism, rebellion, and suppression. It features human sized puppetry, giant hand-painted cantastoria illustrations of the story, and live music.

The production features Isolte Avila, David Bower, Paunika R. Jones, Antoine Hunter and Zahna Moss, all members of the Signdance Collective International, a dance/ music theatre company led by deaf and physically disabled dancers and artists, and the Urban Jazz Dance Company of Oakland. Noted saxophonist Andrés Soto will accompany this performance with an original score he composed specifically for this production.

2016 marks the centennial of Jack London’s death at age 40. In recognition of his unique contributions as a renowned writer, adventurer, social activist, and innovator, The Iron Heel Collective is donating the profits from this production to the Richmond Progressive Alliance and Sunflower Alliance, to assist with their efforts to unite the community and combat climate change.

Suggested donation is $20, but no one will be turned away for lack of funds.