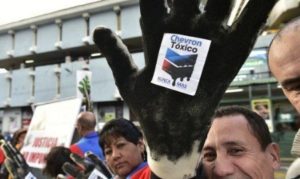 At our May meeting, Sunflower Alliance is proud to present three warriors in the struggle against the international fossil fuel giant headquartered in our own backyard—Chevron, or as it’s pronounced in Ecuador, Chev-wrong.

From its environmental crimes in Nigeria to the Ecuadorian Amazon, and its support for a fascist military dictatorship in Myanmar, Chevron has established an egregious record of human rights abuse, environmental degradation, and the deliberate poisoning of global communities.  The toxic plume of particulate matter emissions from its Richmond refinery affects half a million people in the Bay Area, especially Black and Brown residents of San Pablo, North Richmond, and Richmond.  Come hear about why it’s so urgent to show up for #AntiChevronDay, coming Friday, May 21.

Paul Paz y Miño will address Chevron’s international record: its persecution of lawyer Steven Donziger, who has spent two years under house arrest for representing a group of Indigenous peoples and rural farmers in Ecuador in a lawsuit against Texaco, which was accused of dumping some 16 billion gallons of toxic waste in what would become known as the “Amazon Chernobyl.”  That lawsuit began in 1993, ricocheted between US and Ecuadorian courts, and continued after Texaco was acquired by its now-parent company of Chevron.  The plaintiffs represented by Donziger won the case, forcing Chevron to pay a $9.8 billion dollar settlement. Chevron retaliated, and Donziger ended up under house arrest.  His trial for criminal contempt is scheduled to begin on May 10th.

Andrés Soto will bring the focus back to Richmond: the scope of community resistance to Chevron’s Refinery Modernization Project, its catastrophic refinery explosion and fire in 2012, and February’s oil spill in San Francisco Bay.

Jed Holtzman will discuss current efforts to reduce harmful particulate matter emissions emitted by the refinery (and the PBF refinery in Martinez) and explain how you can support this crucial effort at the Bay Area Air Quality Management District.

Please RSVP at action@sunflower-alliance.org. You’ll receive a Zoom link along with the meeting agenda and campaign updates on Friday, April 30.

Your computer, tablet, or smartphone.