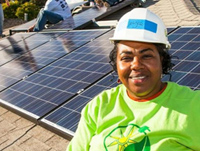 At the end of last year, the Alameda Board of Supervisors contracted with MRW & Associates to conduct a technical study of exactly how a local Community Choice Energy (CCE) system could work. Next month MRW will present their results to the supervisors and a final vote on the specifics of the plan is expected in June. A coalition of community, labor, and environmental groups, the East Bay Clean Power Alliance (EBCPA), has been working since fall 2014 for a community choice system that would promote “local renewable energy development, good, family-sustaining clean-energy jobs, equitable economic benefits, especially for low-income communities and communities of color, and diverse and inclusive representation of the community in decision-making,” according to Colin Miller of the Local Clean Energy Alliance.

As a result of strong advocacy, at least a dozen representatives of union, community and environmental organizations sit on the steering committee that’s guiding the development of the CCE plan. The Oakland Clean Energy and Jobs Campaign, part of this coalition, won a unanimous endorsement of the CCE by the Oakland City Council.

“However, we have reached a point at which the ‘inside game’ has gotten us about as far as we’re going to get,” wrote Miller in an email. Jessica Tovar, an organizer with the Local Clean Energy Alliance, explained, “The county staff and consultants are moving fast with starting a Community Choice program that purchases renewable energy off the market. This would reduce greenhouse gas emissions and provide cheap energy right now – since clean energy can be bought off the market cheaply [at this point]. But we know that we cannot rely on the market to be stable.  We also know that we want to locally develop and own these projects for the long term. What we the East Bay Clean Power Alliance want to see is a 10-year plan that commits to building local renewable energy generation and phase out the use and/or purchase of non-renewable energy.”

The county’s official goals for the project echo the EBCPA goals, including local energy generation, local control of the projects, and union-scale wages for workers. But a report on the county website backs up Tovar’s concerns. It reports that planners have “a strong preference to address issues of [greenhouse gas] reduction and strong renewable energy portfolio first, along with ensuring good program administration and competitive costs. Staff suggests that any Committee conversation begin with these issues, and then weave other issues into the policy fabric in subsequent discussions.”

But the East Bay Local Power Alliance wants to build local power and economic justice into the plan from the beginning. Vivian Huang of the Asian Pacific Environmental Network said, “We really want to support renewable energy to address the health and climate impacts” of fossil fuel,” she said. But in addition, “we see community power, not just as electricity generation but as economic and political power. Who controls our energy? Who has a say in the ownership and governance of that energy?”

Grassroots activism has been central to the creation of CCE in Alameda County all along. “Advocates have really been the drivers for this,” said Bruce Jensen of the Alameda County Planning Department. Much of this push has been coordinated by the Local Clean Energy Alliance, a coalition of 90 Bay Area environmental and clean-energy organizations, with the Oakland and Berkeley Climate Action Coalitions, and the Clean Energy and Jobs Oakland Campaign, which is made up of “organizations that work in poor communities and communities of color, social and economic justice organizations,” according to Al Weinrub of the Local Clean Energy Alliance. The Sierra Club and some local unions have also been active in pushing for Community Choice energy.

Now the activists are mobilizing to make sure the goals of local, good jobs, racial and economic justice, and community control are built into the plan for Alameda CCE from the start. The April 14 meeting will include, not only updates on the official process, but strategies for the “outside game” – developing a more powerful grassroots constituency, as Miller wrote, by “prioritizing our partnerships with labor, grassroots, membership-based, and member-led social justice organizations. These represent communities who are most impacted by job insecurity, poverty, prisons, pollution, and climate change.”