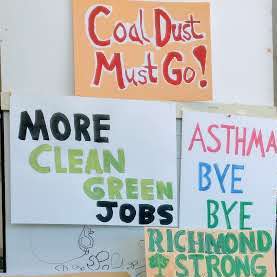 The scrappy industrial city of Richmond took a bold step toward a fossil fuel-free future on Tuesday night when its city council passed an historic land use ordinance banning the storage and handling of coal and petroleum coke in a three-year phaseout.

This means that Richmond will no longer be the source of one-fourth of West Coast coal exports to Asian markets, and its children will be able to breathe a little easier.  The working class city of Richmond, home to the Chevron refinery and a host of other entrenched polluters, has begun at long last to transition from its dependence on toxic industry.

The vote itself took exactly one minute.  To members of the public who had waited through nearly four tedious hours of discussion of other issues, announcement of the ordinance’s passing came like the sudden, magical sighting of a rare butterfly in flight.  There was a slow collective inhale and then a joyous eruption of cheering throughout the council chambers wherever the red-shirted supporters of No Coal in Richmond sat.  Opponents of the ordinance met the announcement with stunned silence.  Outside the council chambers one heard angry, muttered talk that a “fix was in” and vows that the fight had just begun.

Previous hearings on the ordinance had been far lengthier and acrimonious affairs—marathon demonstrations of a community polarized around fossil fuels.  For environmental justice activists, the depth of anger and resistance on the part of local industrial unions came as a shock.  Certainly the battle lines were familiar, the old “environment vs. jobs” script getting a new, invigorated reading.  But the stakes were higher this time around with the Western States Petroleum Association mobilizing its new Building Trades allies to large, organized displays of class anger.  “Is my job too dirty for you?” nearly drowned out calls for clean green jobs and community health.  Terminal workers seemed unmoved by the medical testimony they heard about Richmond’s high levels of asthma and heart disease, and the serious public health impacts of coal and pet coke.

How We Got Here

The alliance between environmental activists, city progressives, public health experts, and members of the faith and small business communities held strong in the face of this formidable opposition. Organizing had begun slightly over two years ago in November 2017 when Minda Berbeco of the Sierra Club called a kick-off meeting to discuss the launch of a campaign to stop Bay Area coal exports. The Richmond city council had already banned coal export from city-owned facilities, but the privately-owned Levin-Richmond Terminal was steadily increasing the quantities of Utah coal it was storing in uncovered piles on its wharf.  In 2017, the Levin-Richmond terminal shipped over 1.1 million metric tons of coal, a 300% increase over its 2016 coal shipments. Richmond residents from all over the city—whether living next to the rail lines where the coal trains passed, or in the higher-rent marina district with million dollar views—were increasingly alarmed by the greasy black dust coating their window sills and cars. People began to reach out to the mayor with their concerns, worried about the growing quantity of dust and the state of their lungs.

A draft ordinance was written and presented to city staff for review.  And a campaign strategy began to unfold after months of deliberation about how to proceed.  Veteran environmental activists, some fresh from the fight against coal export in Oakland, began to work alongside Richmond community members. Janet Johnson of the Sunflower Alliance sent waves of canvassers into the community to collect 2,200 signatures on letters to the mayor and city council in support of the ordinance.  She coordinated the various efforts of No Coal in Richmond volunteers who created and maintained a comprehensive website, undertook research, wrote position papers, recruited technical experts, collected endorsements from unions (California Nurses Association and the United Teachers of Richmond CTA/NEA), repeatedly lobbied city council members, did public speaking, and engaged in countless other manifestations of an effective inside/outside strategy.  The core group remained cohesive even when political pressure was applied to revise the ordinance and de-escalate the demands—i.e., drop pet coke.  Councilmember Eduardo Martinez, the sponsor of the ordinance, set a shining example in his refusal to back down and his unwavering belief that the city of Richmond deserves far better than coal and refining dregs.

The two-year No Coal in Richmond campaign has been a veritable rollercoaster with plot twists and turns and more than a little political intrigue sparked by the opposition from industrial labor.  One clear take-away is this:  The anti-coal campaign may have won a decisive and historic victory, but the struggle is not yet over.  Wolverine Fuels in Utah and the Levin-Richmond Terminal have promised a lawsuit against the City of Richmond, and no doubt they will deliver on that promise.  But above and beyond whatever happens in the courts, there is still much work to be done to initiate a real dialogue—and détente—with industrial labor.

Two-thirds of what the Levin Terminal has been storing and handling for maritime export is Utah coal bound for Japan.  The remaining third is pet coke, a heavy metals-laden residue of oil refining, whose sole source is the Phillips 66 refinery in Rodeo. (Chevron handles the export of its own pet coke, as do Shell and Marathon in Martinez.  The latter two ship out of the Koch Carbon facility in Pittsburg.) It was Phillips 66 that sounded the alarm to allied Building Trades locals to join the fight against the coal and pet coke ordinance because it would cause the refiner to ship its pet coke from another facility.  Compounding this, the 62 workers at the Levin Terminal, 48 of them members of an Operating Engineers local, were persuaded by the Levin Terminal’s owner that their very jobs are on the line:  Levin insists there are no non-toxic, alternative commodities available for it to ship.  There is no reason to believe that those attitudes have softened.  Environmental activists would very much like to see the Levin Terminal survive, with a smooth transition to other commodities and no job loss going forward.  This is a real and urgent test case for the Just Transition we all want to see happen.  The challenge before us now is:  Can we help broker a Green New Deal in Richmond?

Here’s a sampling of reporting on the win:

Richmond bans coal shipments from port despite threats of lawsuits