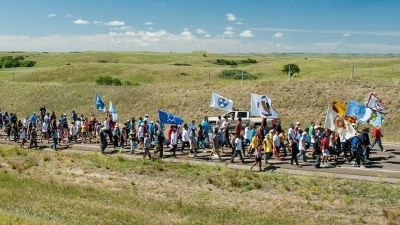 Join a virtual training to learn about what’s currently happening with DAPL and how you can take action.  Very soon the U.S. Army Corps of Engineers will head to court and share their findings from the environmental impact review of the Dakota Access pipeline and the danger it poses to the Standing Rock Sioux Tribe.  This April 9th hearing is critical because the court could order the Army Corps of Engineers to shut it down.  We need to stand in solidarity with Indigenous water protectors and allies!  Every single day that passes, the health and safety of the Standing Rock Sioux Tribe are threatened.

To help people join the fight, 350.org is hosting a special training led by on-the-ground activists and Indigenous leaders.  Attendees will learn how to take actions to stop DAPL, Line 3, and all other fossil fuel projects.

Can’t make it?  RSVP and you’ll be sent a recording.

Special guests will provide the latest updates on the fight to stop the Dakota Access pipeline.  These will include a representative from the Tasina Sapa Win Makwa Initiative who is running from the DAPL construction site in Standing Rock to the Line 3 pipeline in Minnesota to Washington, D.C.  Runners will arrive in D.C. on April 1 to deliver a clear message to President Biden: Stop the Dakota Access pipeline and all fossil fuel projects.  Other speakers include Dawn Goodwin of the Rise Coalition and Nancy Beaulieu of MN350.

Experienced trainers will also lead sessions where you’ll learn about easy actions you can take to stand in solidarity with the Indigenous runners.  You’ll have the option of choosing one of two training sessions:

Together, we can hold the U.S. Army Corps of Engineers accountable and push President Biden to shut down the Dakota Access Pipeline and all fossil fuel projects, but it’s going to take all of us getting involved.

Can you join the fight and attend the virtual training  to hear the latest from Indigenous runners and learn how you can hold a solidarity action?