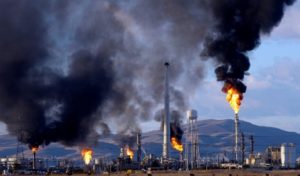 June 22nd update on the fight for Bay Area refinery emissions caps:
A shocking last-minute staff revision of the rule approved by the Board of Directors on May 31st overturns the original cap formula in order to allow a 23% increase of Valero GHG emissions and co-pollutants, along with other adjustments.  This proved so confusing to the Board that the vote was delayed for further deliberation—an approach suggested by an emergency letter issued by the state Attorney General.  Board consensus is to pass some kind of cap before September, with a smaller committee assembled to get that done.  But the Board didn’t seem particularly responsive to activist testimony exposing the latest staff-proposed cap for what it really is—an allowance for increased refinery emissions.

What Board objected to is what is politely called the “process,”  a relentless series of  staff manipulations since the inception of this fight four years ago.  Board was presented with a total of three revisions of numbers since they voted on May 31st to endorse the original cap.  The last set of revisions came in at 4 PM the day before the hearing.

It was a hard-fought game with a tied score—probably the best possible outcome, given the very tough circumstances.

This was posted just before the June 21st hearing:

Last minute staff changes to Rule 12-16 have inserted huge loopholes that will allow unacceptable emission increases at refineries.  Bay Area Air Quality Management District staff-proposed emission “caps” are now set at an average of 25% higher than current emissions—equivalent to adding another Chevron refinery to the Bay Area air load!   We must insist that refinery cap levels be restored to the original values in Rule 12-16.  These are the values the Board supported when it voted 19-3 for staff to prepare a final rule for the June 21st adoption vote.

We now face a choice between capping greenhouse gas emissions at their current levels or allowing a massive emissions increase.  New emissions limits released by Air District staff on Friday allow GHG emissions for Chevron Richmond to increase by 21.7%; Phillips 66 Rodeo by 44.1%; Shell by 7%; Tesoro Avon by 19.8%; and Valero Benicia by 34.8%.  By what stretch of the imagination can staff call this a cap?  The more accurate word is betrayal.

Instead of celebrating the GHG cap the Board was led to believe it was voting on this Wednesday, we are scrambling once again to do damage control.   This audacious 11th-hour, rear-guard action by staff is the crowning effort of  their four-year resistance to a community-sponsored regulatory measure that would keep out heavier crude mixes with increased tar sands.  But if the public is willing to express its outrage, and if the Board votes down these staff revisions, this rule still could be the first in the state and in the nation to regulate local refinery-emitted GHGs.

Can you email Board members?  Will you attend this history-making hearing and raise your voice for climate protection and environmental justice?

Here is the analysis, conducted by local public health experts, of the deadly local health impacts of a tar sands transition.

For background, listen to this April 19th KALW report, which includes interviews with members of the Richmond community whose very lives depend on the passage of this rule.  (Both the broadcast and a transcript are available.)

Reporter Will Parrish has done excellent investigative work on the issue.  See his recent articles in the Monthly and the Nation.

Finally, follow this link to more detailed background on this website of the four-year struggle to cap refinery emissions.  And to front page commentary here.