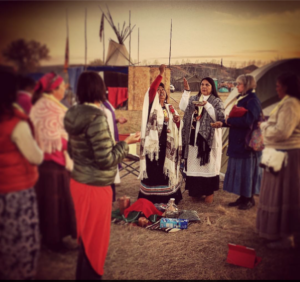 The annual Wild and Scenic Film Festival is online this year. Among the many films available for streaming are some that specifically highlight fighters for climate justice, including:

End of the Line : The Women of Standing Rock 87 minutes

Featuring shocking, never-before-seen law enforcement video surrendered by a disgraced officer, END OF THE LINE: THE WOMEN OF STANDING ROCK is the incredible story of the indigenous women who establish a peaceful camp in protest of the $3.8 billion Dakota Access oil pipeline construction that desecrated ancient burial and prayer sites and threatens their land, water, and very existence.

The Ants and the Grasshopper. 74 minutes

Anita Chitaya has a gift; she can help bring abundant food from dead soil, she can inspire the stubborn men in her village to fight for gender equality, and she can end child hunger in her community. Now, to save her home from extreme weather, she faces her greatest challenge: persuading Americans that climate change is real. Traveling from Malawi to the US, from America’s heartland to the halls of power, to grass roots spaces, Anita and the people she meets explore how we can “live more simply so that others can simply live.”

The New Environmentalists share a common goal – safeguarding the Earth’s natural resources from exploitation and pollution, while fighting for justice in their communities. The film is the latest in the Mill Valley Film Group’s Emmy Award-winning series featuring inspiring portraits of six passionate and dedicated activists. These are true environmental heroes who have placed themselves squarely in harm’s way to battle intimidating adversaries while building strong grassroots support. The activists profiled in The New Environmentalists are recipients of the Goldman Environmental Prize, often referred to as the Green Nobel Prize. Narrated by Robert Redford, The New Environmentalists illustrates how ordinary people are effecting extraordinary change.

90% of the available lands in the Greater Chaco have already been leased for oil and gas extraction. Over the course of three years, Navajo and Pueblo leadership including Secretary of the Interior Deb Haaland (Laguna Pueblo), Julia Bernal (Sandia Pueblo), and Navajo Nation Council Delegate and co-director Daniel Tso have been intimately collaborating to tell their stories in this film as they struggle to protect what little remains of this sacred landscape, including the World Heritage Site Chaco National Historical Park in the SW United States.

YOUTH v GOV is the story of America’s youth taking on the world’s most powerful government. Armed with a wealth of evidence, twenty-one courageous leaders file a ground-breaking lawsuit against the U.S. government, asserting it has willfully acted over six decades to create the climate crisis, thus endangering their constitutional rights to life, liberty, and property. If these young people are successful, they will not only make history, they will change the future.