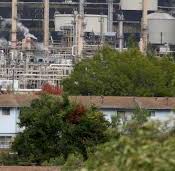 The Contra Costa Planning Commission is preparing to rubber-stamp a very inadequate Environmental Impact Review for the Phillips 66 refinery’s proposed conversion to producing biofuel. Join the meeting to tell them this is unacceptable.

On March 23 the commission unanimously approved a similar deficient EIR for the Marathon refinery’s biofuel proposal.  A broad coalition of environmental organizations has filed an appeal of this decision. They have prepared detailed analyses showing that both the Marathon and the Phillips 66 EIRs fail to deal adequately with potential negative impacts of these project.

There’s one big difference.  The Phillips 66 proposal is on a much larger scale. Combined, these projects would make Contra Costa County the world’s largest producer of liquid biofuels based on the refining of animal fats and vegetable oils.

Biofuels are promoted as a green alternative to petroleum on the theory that the absorption of carbon dioxide by growing plants balances the carbon dioxide released by burning the oils the produce.  The truth is much more complicated.

Refining biofuels creates potential local and global hazards. It requires higher temperatures than refining petroleum, creating the potential for more fires, explosions, and flaring.  It requires larger amounts of hydrogen, usually produced in a process that releases methane, a toxic gas that is a more powerful GHG than carbon dioxide.

Some feedstocks, especially animal fats, create potential odor problems, and plant and animal fats have the potential to gum up refinery equipment.

Growing enough crops for biofuels has the potential to divert agricultural land from food crops, raising global food prices. There is also a danger that demand for biofuel feedstock will lead to increased deforestation.

Like the environmental review of the Marathon proposal, the EIR of the Phillips 66 proposal fails to give adequate analyses of these hazards and possible mitigations. That will be the focus of comments from community and environmental organizations at the Planning Commission hearing. Note that this hearing is not about the pros and cons of the project itself, but about whether the current EIR adequately addresses these issues.

Agenda for the meeting and link to join here

For more detail on the deficiencies of the Phillips 66 EIR: